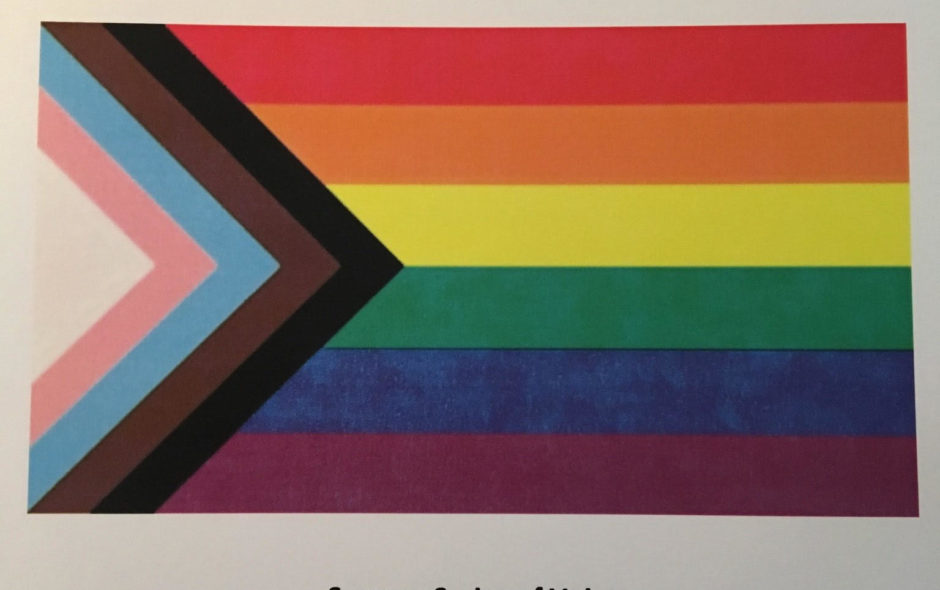 This piece is adapted from a sermon I wrote to preach at Sojourners UCC Church in Charlottesville on Sunday, June 9. I was invited to speak in honor of Pride Month about queer-inclusive faith communities. I began by reading the poem “WHAT THE QUEER COMMUNITY SHOULD HAVE TOLD US” by Kai Cheng Thom, a trans woman of color writer, performer, lasagna lover, and wicked witch.

Once when I was in college, we had a student and faculty queer mentoring event I barely remember except for Dr. Karen Singleton, a queer Black woman therapist, answering a question about what she wished she’d been told growing up about being gay.

She said: “I wish someone told me it was going to be fun. It’s really fun.”

I’d known I was queer for a long time before coming out. I didn’t know being queer would be so much fun. I didn’t know it would be so worth it. Worth everything. The pleasure of queer love, sex, romance. The indescribable feeling of feeling like myself.

And the other feeling layered on top of that, the feeling we call Pride. Not hubris, but pride as a good thing, pride as celebration. Telling my new coworkers about my wonderful girlfriend and her two wonderful daughters. Putting “queer femme” in my twitter bio. Visiting my favorite queer beaches and dyke bars.

The origin of Pride Month is the 1969 Stonewall uprising. Trans women of color fought back against police violence at the Stonewall Inn gay bar in New York and that’s the origin of what we honor each June.

So Pride isn’t just about coming out.

It’s about fighting back.

It’s about the acts of resistance that directly dismantle systems of oppression and liberate us and our loved ones.

My comments today primarily focus on this second question. I will weave a story in three parts, through three communities: the one in which I came of age before I came out; the one through which I re-entered my faith as I was coming out; and the one I yearn for now.

I am Jewish, so my experiences with personal faith and faith communities come from there.

The community in which I came of age shows us the limits of liberal inclusion.

I grew up in a liberal community outside of Boston, Mass. I was a teenager in the middle of the Don’t Ask, Don’t Tell era at the turn of the 21st century. My large public high school had a Gay Straight Alliance and featured queer student speakers in our annual Diversity days. I had access to seeing, meeting, and learning from lesbian, gay, bisexual, queer, transgender, and genderqueer people. I loved these opportunities and drank in thirstily every drop of queerness made available to me.

The desires surfacing in me made me nervous.

I did. I dated boys and didn’t come out and did get into an elite college.

Throughout high school, I was active in Conservative Jewish youth group, a branch of Judaism with a history of condemning same-sex sexual behavior that at the time of my adolescence allowed neither gay rabbis nor same-sex marriages. There was a lot of hetero dating going on in youth group, and examples of homophobic teasing targeting boys and girls that I’ve decided not to detail here. I don’t remember any conversations with adults about sexual orientation, until one weekend my senior year when they brought in Scott Fried, a  gay Jewish HIV-positive writer/educator who arrived full of affirmations and assurance. He told us over and over again: “You are sacred and more than enough.”

You are sacred and more than enough.

You are sacred and more than enough.

I am sacred and more than enough.

It wasn’t everything, but it was a start.

2: Coming back and coming out

The community in which I re-entered my faith as I was coming out shows us the benefits and limitations of affirmation.

I got to college, and eventually, I took space from my faith.

Although the Jewish Conservative movement had adjusted some towards LGBT-inclusion, such incremental steps did not appeal to me. I wanted queerness. I yearned for queerness. I’d heard by this point, you may remember, that queerness could be super fun. And I believed it. To join a faith community again, I needed a space vibrant with queerness.

I was invited to a weekend retreat called Jews in the Woods. Before Friday night worship began, we went around in a circle to share our names and pronouns. We had workshops on consent, and many informal conversations about gender and sexuality. Through these retreats I met people based in Boston who would bring me into the Kavod Jewish social justice community when I moved home after college. This pluralistic community was rich with queer people and queer culture and queer faith and even queer sexuality.

It was with the Kavod community in Boston that I discovered the Sexual Orientation Spiderweb. Without the time — and the props — to walk you through it here, I’ll just say I found it on an online discussion board for people who are asexual, or don’t experience any sexual attractions. The sexual orientation spiderweb is a way to diagram a person’s different degrees of intensity for different kinds of desires, like desires for touch, sex, love, romance, and emotional intimacy, desires that may be oriented towards different kinds of people, like men, women, genderqueer people, butch dykes, femme queers, you name it. Literally, you label the spiderweb yourself.

The sexual orientation spiderweb was so much fun. It was fun to discover, fun to use, fun to teach. And it was really, really fun that those same people discovering it with me were also by my side as we observed Shabbat and holidays together within our faith community.

What we found in the sexual orientation spiderweb was a tool to help us identify, name, and express our own sexuality. It helped us gain clarity about what sexual connections we did or did not want to pursue in our lives — it also helped us feel Pride.

But let’s return that conception of Pride I explained earlier…

The Sexual Orientation Spiderweb and the other community-building education work I did with Kavod met some needs of visibility and recognition. It showed this community was diverging from Jewish institutional histories of active and passive homophobia. It met the need to build a faith community committed to the explicit sacredness of queer people and queer love.

But there were so many tangible needs we weren’t meeting, and weren’t prepared to meet. We were not changing the material conditions of our lives, and we certainly weren’t changing conditions for people outside our own beloved community.

The community I yearn for now is both pro-queer and anti-fascist. It is taking action to make changes not just amongst ourselves but in the world at large.

Content note: In this next section, I talk generally about fascism, and specifically about the white supremacist attacks on Charlottesville in 2017.

During and after Charlottesville’s 2017 Summer of Hate, people who knew me in the Northeast before I moved here kept asking, why had I changed my focus? Why, when I used to be focused on sex ed and supporting queer youth, was I now talking mostly about fighting white supremacy? Why the apparent pivot?

I want to take artistic license here to say it was not a pivot at all but rather a clear extension of my sexuality work, but that is not the full story, is it? The summer of 2017 was actually much more than a pivot for so many of us. It was — devastating. Traumatic. Life-threatening and life-changing and life-defining and horrible and terrifying and wrong. It was a fight against an active genocidal agenda that’s been brewing for centuries and decades and years and escalating right under our feet in a way I personally hadn’t fully faced until I stood literally face to face with those fascists, and witnessed their racist rhetoric and sexist slurs and homophobic taunts.

Because while my work and much of Charlottesville anti-fascist organizing has appropriately focused on how white supremacist anti-Black racism underlies American fascism, neither white supremacy nor fascism is one-dimensional. Racism, misogyny, anti-semitism, islamophobia, homophobia, transphobia, and more are intricately linked together in the web of lies that forms the foundation of fascist justification for a genocidal authoritarian hetero-patriarchal White ethno-state.

I pivoted because I learned. I learned that my own survival as a queer person and Jewish person depends on more than affirmation and education. I learned that a community that affirms queerness is better than a merely tolerant one, but is still not enough. Affirmation is not enough. Loving queer people requires defending queer people, which requires action against people who want us dead.

This past week, 50 years after the Stonewall uprising, the New York City police department apologized for raiding that sacred queer space. But this apology from the NYPD, from an institution responsible for so much lethal and life-destroying violence against queer and trans people in the past 50 years, is not enough. We are still in danger.

In the same week as this NYPD apology for homophobic violence half a century ago, news broke that my own home city of Boston, Mass. received a permit application for a so-called Straight Pride Parade planned for this August.

As written at ThinkProgress: “The organizers behind Boston’s Straight Pride Parade should concern you: Some of the organizers are close to neo-Nazis and other white supremacists.” And here is more background on their “ties to violence and hate”.

This Straight Pride Parade seems yet another attempt to gain a platform for fascism.

Do we allow fascists to use our communities — and our identities — to push for genocide?

Do we allow fascists to normalize themselves as identitarian activists?

Do we allow fascists to parade unopposed?

No, my beloved community, we do not.

I have a lot more I want to say about this so-called Straight Pride Parade. Feel free to ask me about it, and keep an eye out for future writing too. For now I will say again: This “straight pride parade” seems yet another attempt to gain a platform for fascism.

I yearn for faith communities that define being pro-queer as being anti-fascist.

I yearn for faith communities actively challenging and changing both internal community dynamics and the material conditions of the outside world.

And if what I’m saying feels vague and you want more specifics, I’m happy to talk and connect you with others. Because there are so many options and we need a little back-and-forth to come to something that’s right for you.

Because Pride is a commitment to fight for our survival, and our survival is under attack.

Because, in the words of Kai Cheng-Thom:

You are worth saving

& you are worth holding

& you are worth teaching

& you are worth more than political theory

& you are not disposable

& you will not be thrown away

Thank you for everything you have done, and everything you will do, in your personal lives, and together as a community, to smash fascism and dismantle white supremacy and defend our sacredness and build a world where the people currently most targeted have what they most need. 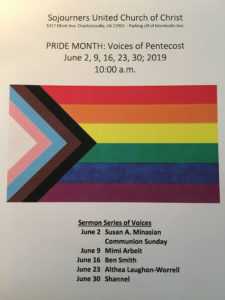