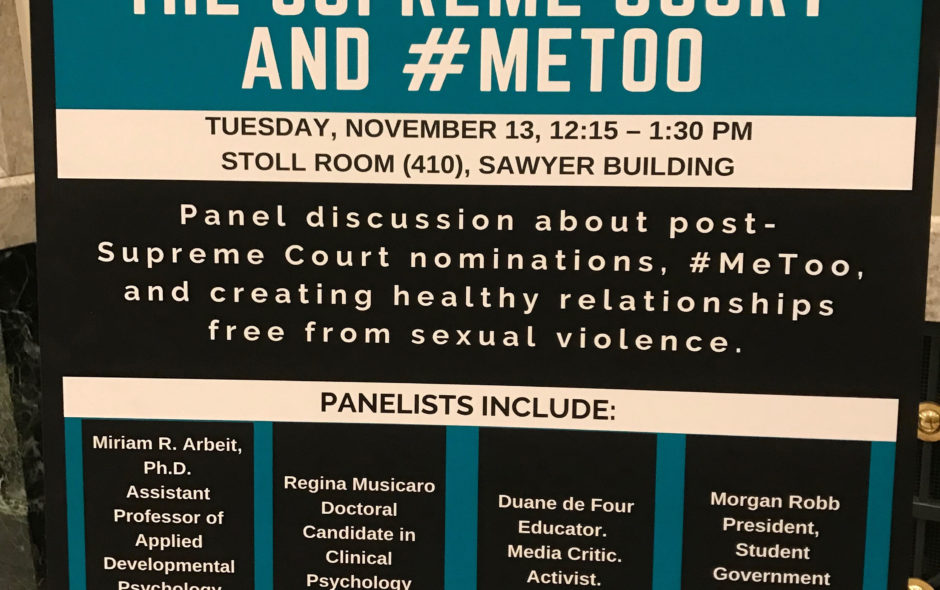 Today I was on a panel to discuss sexual violence & the recent Supreme Court confirmation, and I spoke about rape culture, fascism, and survivor-led activism. Thank you Duane DeFour for joining us at Suffolk and for the analysis of perpetrator behavior you brought to the discussion. ***If anything above resonates with you, please make a contribution to the fundraiser I’m doing for Wagatwe Wanjuki, an anti-rape activist who has taught me so much.***

If it has happened to you, I’m sorry. I believe you. And it’s not your fault.

It is, first and foremost, the fault of the person who perpetrated an act of violence against you. And it is, too, the fault of what we call rape culture.

Rape culture is the term we use to name that sexual violence is not a series of isolated events, but rather is a systematic and systemic intentional agenda to use sexual violence as a form of social control.

Rape culture is on purpose because it serves a purpose, and we cannot be fully effective at stopping rape culture unless we are also ready to admit and address the purpose it serves. Rape culture is a systematic and systemic intentional agenda to use sexual violence as a form of social control of women and queer people in the service of White Supremacy.

My disciplinary training as a developmental psychologist is about understanding human development as ongoing mutual influences between the individual and context. I will anchor us in an analysis of the current developmental context in which we operate, and then I will affirm the power of individual agency in making much-needed change.

Rape culture, sexual violence, and men’s violence against women are core components of the white supremacist fascism on the rise across America.

It is not your fault, and yet it is now a part of your life, a part of your development, a trauma for you to process and survive and respond to in whatever ways you choose. So before I close, as promised I want to talk about individual agency. I want to talk about the role of survivor-activism in bringing about much-needed change, to end rape culture, to dismantle white supremacy, and to stop fascism in its tracks.

I’m grateful for the people who went to DC to put their bodies on the line in solidarity with Christine Blasey-Ford and in protest of confirming a lifetime appointment on the Supreme Court for a man who has testimony against him as a perpetrator of sexual assault. What was the purpose of these protests and what did these activists do for us?

***If anything above resonates with you, please make a contribution to the fundraiser I’m doing for Wagatwe Wanjuki, an anti-rape activist who has taught me so much.***