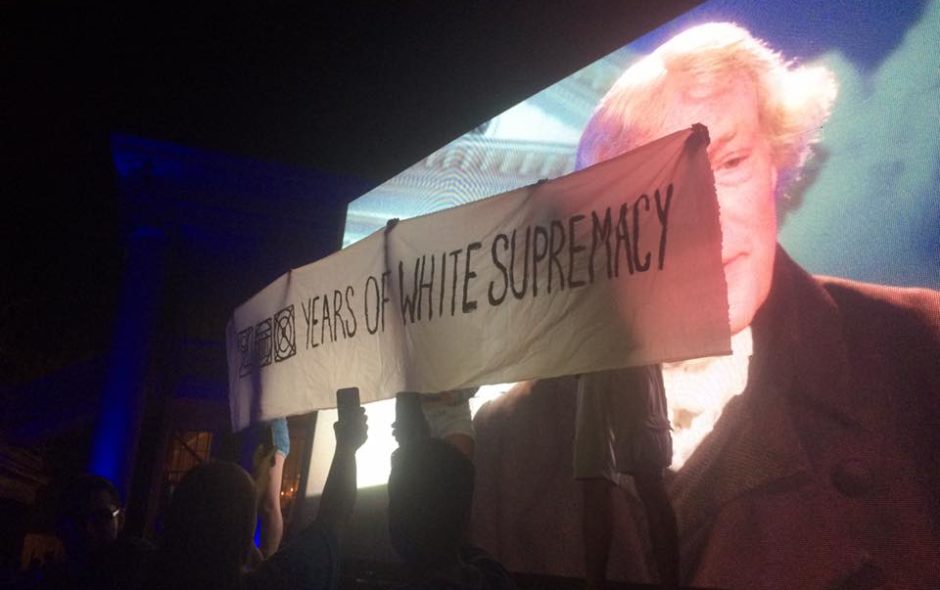 UVA students standing in front of an image of Thomas Jefferson, holding a sign that reads "200 years of white supremacy."

This piece was originally posted on March 16, 2018 with the Society for Research on Adolescence.

We are watching them mobilize across the country: youth fighting for gun control; youth fighting for a Clean DREAM Act; youth fighting against police brutality and structural racism. Here are ways you can offer support to the adolescent activists in your life — and maybe also help a young person along the pathway to plugging into these social movements for change.

1. Provide Access to Knowledge — the kind they don’t (often) teach in schools

Stephen Russell, Anna Muraco, Aarti Subramaniam, and Carolyn Laub conducted focus groups with student leaders of high school Gay-Straight Alliances (GSA) to talk about empowerment, and they asked participants what aspects of their GSA involvement helped them become empowered. The study found that youth talked about “having and using knowledge” as one key aspect of empowerment. Useful types of knowledge included information about their rights as students and how to advocate for their rights within the school system, and facts that they could use to dispel discriminatory homophobic beliefs. In addition, GSA leaders benefited from knowledge about different approaches to organizing and activism, and how to connect the work they were doing together to broader social movements that they are now a part of. (Side note: Emma Gonzalez, one of the Parkland student activists, is President of her school’s GSA.)

Knowledge is not always sufficient to motivate action and change. Paulo Freire’s theory of critical consciousnessidentified the dynamic relationship between reflection and action — we need to think critically about the world, take action within the world towards change, think critically about what we learn from those actions, and return to further action, iteratively. Matthew Diemer, Luke Rapa, Catalina Park, and Justin Perry used a survey study of predominantly Black and biracial high school youth to identify three components of critical consciousness:

Youth don’t have to act alone! Critical action — and critical reflection, too — do not and perhaps should not have to be seen as isolated, individualistic processes. Ben Kirshner and Shawn Ginwright identify youth organizing as a powerful developmental context to promote thriving among youth of color, with regard to individual development, community development, and promoting social movements. They define youth organizing as “a form of civic engagement in which young people identify common interests, mobilize their peers, and work collectively to address quality-of-life and human rights issues in their schools and communities.” In other words, it’s about young people connecting with each other and collaborating to leverage power towards achieving the changes that they need for themselves and the people around them to thrive.

Providing youth access to knowledge, fostering critical consciousness, and helping youth organize are ways for adults to support youth activism whether as a parent, teacher, youth group leader, or simply through an informal connection with a certain young person. Youth are leading us towards necessary social change. We have the opportunity not only to applaud them, but also to equip them to become their most fierce and most effective selves.