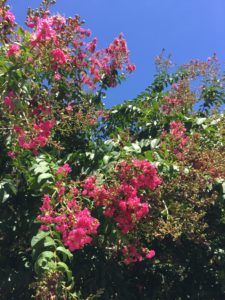 I spent this morning working on a paper about training undergrads in bystander intervention to stop sexual assault. One thing about bystander intervention is though, it absolutely wouldn’t have helped me.
There were no warning signs – definitely not in public, anyway. And there was no one else around when it happened. I willingly went to his house. Eagerly, even. He was a dear friend, and I was so touched when he asked me to come over. Sure we had a history, and I’d loved him in some way, and we made out once, years before.
I went over as friends. Not that I wouldn’t have considered it in general but… there was just too much else going on. And I told him as much that night, too. He kissed me and I pulled back: “I can’t. There’s just too much else going on.”
Please don’t tell me what I should have said next. That was a no. And I figured no was enough. I thought no was enough. I thought no was enough.
I am sacred and more than enough.
He kissed me again, moving in, and I froze. I dissociated. As I said previously, I had so much else going on. I was so traumatized in so many ways already and had spent much of the previous six months pretty dissociated already so, I dissociated. So, that’s what happened.
—
When I told my closest guy friend a week later, he asked why I didn’t call him to pick me up. How do you figure out, at 19 years old, amidst so many other crises, that this particular crisis is worth calling a friend in the middle of the night to drive an hour to come pick you up? And if he does wake up and answer your call, and if he does come pick you up, then would he also return with you the next morning to get your parents’ car back? Because I drove myself to that place to begin with. Willingly. Eagerly. Having planned to sleep over, I was in no state to change those plans and drive myself home. I hate driving on a good day, but also like, being even a little intoxicated, and being in a lot of shock, no way.

I slept over, woke him up in the morning to get directions to the highway, and never spoke to him again.

—
He didn’t go to my college. He went to a college, and I went to a college, but it wasn’t the same college, and we weren’t on campus when it happened, and honestly I don’t even know if I would have thought to report it. I told my two best friends from my dorm because we talked about consent and sexual assault all the time anyway. I told that one guy friend who then asked me why I hadn’t called him for help. And there were a few other people I tried to tell but I couldn’t, or didn’t, or something. I didn’t tell my parents for many, many years.
—
Today I was working on a paper about bystander intervention programs and I was struggling, because it’s hot and I was working late last night and I’m tired. I was really struggling, and then I took a break and realized, I need to write this first. When I tell myself this story I tend to think of it as relatively mild, but I would never call sexual assault mild if anyone else were talking about it. I guess for me it’s as I said, there was so much going on in my life right then, so even at the time, it felt mild compared to the other things. But it had a serious impact on me, then and, in some predictable and some surprising ways, continuing to now.
—
About a year and a half after it happened, I was lying on the table in one of many physical therapy appointments, as the physical therapist was trying to decipher the odd patterns of tension, inflammation, and pain in my body. He asked me, carefully, if I’d ever been sexually assaulted. I said no. I had spend so much effort keeping this secret that I just said no instinctually. I went numb; I knew I was lying. To this day I wonder what I might have learned about my body, and what health care I might have received, if I were able to answer truthfully sooner, or if he were able to stay with the question long enough to hear the real answer.

I do believe he saw something real. The place he was looking, the injury he was examining, that was a real injury. That was a real thing that happened. And it hurt.

I am sacred and more than enough.

—
There’s no particular institution I can ask to #JustSaySorry. But Wagatwe Wanjuki and Kamilah Willingham are doing exactly that, addressing Tuftsand Harvard, respectively. Follow what they’re doing over the next few weeks and send some cash to their org, Survivors Eradicating Rape Culture, to support them in this exhausting work of action and healing, healing and action.