The first time I was asked to share my name and pronoun, I felt pretty upset. Why make gender so primary, right here at the beginning of this event, as we introduce ourselves to each other? I was in the woods with a bunch of Jewish activists, trying to escape the gender binary and fight the patriarchy. So I said something like this: “My name is Mimi, and you can use ‘she’ to refer to me, as long as you understand that doesn’t say anything about who I am and what I’m capable of.”
I was at a point in my life where priming gender was really hard for me. “Priming” refers to the idea that simply bringing up a social category, such as gender, results in psychologically (and maybe subconsciously) bringing up the stereotypes associated with that social category, such that the pressure associated with those stereotypes has a stronger effect. I felt that identifying myself along the gender binary meant making myself vulnerable to expectations based on gender. Just because I didn’t think twice when people refer to me as “she” didn’t mean I was totally comfortable with everything in the category of “woman.”
Five years later, having learned a lot about my own and other people’s experiences of gender, and having more access to multiple means of both escaping the gender binary and fighting the patriarchy, I came around. Friends, colleagues, and co-conspirators at Keshet taught me many valuable lessons about how to be an ally to transgender, genderqueer, and gender variant people. I came to see my own privilege in the fact that when a person is left to their own devices to guess what pronoun is best to use when referring to me, that person will always choose “she.” At least, people always have, and I my guess is that they always will. So I never have to fear being “mis-pronoun-ed” (someone using the wrong pronoun to refer to me). In addition, I don’t have to endure any uncomfortable or tense moments when I first meet someone, as they figure out what pronoun to use. In fact, I’d never actually thought about what pronoun I use until that moment in the woods with the fruity Jews.
Now, opening a space by inviting everyone to share their name and their preferred pronoun has a lot of meaning for me, on multiple levels.
For these reasons, I have come to value sharing names and pronouns as an important ritual for setting the space of a community event or retreat. In my next post, I share some questions that have come up in introducing this ritual to my current community. 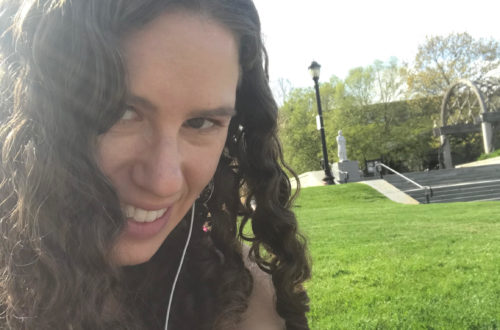