As much as we try to have a feminist, egalitarian wedding, we are still participants in the heterosexist patriarchy. We grew up in it, we are getting married in it, and we can only hope that we will do all we can to work so that future generations do not have to also suffer under it. The intention of this post is to render visible the stamps of sexism that are leaving their mark on our wedding, with hope that through making these visible, through acknowledging and understanding the effect of the patriarchy even on this careful couple, we can develop the communal awareness necessary for working together to repair this broken world.

10 stamps of sexism (among many) in our wedding and in the wedding, in the order in which they appear:

1. My Tisch.
In traditional Judaism, only the groom has a tisch (which means table in Yiddish). The Tisch is the time right before the wedding ceremony. There is a specific ritual in which the men distract the group while the bride is supposedly getting ready. Well, the Tisch now takes place after photographs have been taken, so I will already be ready. So I am also going to have a Tisch, except there is no tradition for a bride’s Tisch. So I will be making up my own thing, while my partner participates in an old, old tradition.

2. My hair and makeup.
This is not a Jewish tradition. This is an American tradition. Let me know if you need me to explain further.

4. My kittel.
It is traditional for the Jewish groom to wear a kittel, a white robe, during the wedding ceremony. My partner and I will both be wearing one. See #1 regarding the contrast between his participation in an ancient tradition while I, going through almost the exact same motions, will be doing something unusual, surprising, shocking, and possible upsetting to others.

5. The opening blessing.
We are going back and forth with our officiant to try to figure out a version of the opening blessing that feels good to all of us. The traditional opening blessing references the distinction between sanctioned and unsanctioned sexual unions, and I just can’t stand the fact that we would open the ceremony with even the implication that we were implying that marriage is necessary to sanction our sexual relationship. If that’s not patriarchy, then what is?

6. The Hebrew versions of the blessings in general.
My partner and I grew up in Conservative synagogues and youth programs with lots of Hebrew prayers. As such, our ceremony includes Hebrew prayers in their original form, although they will be followed by English feminist-humanist interpretations of the meanings of these prayers. As such, there is a ton of sexism and patriarchy hidden in all that sneaky Hebrew.

7. Signing the Ketubah.
The Ketubah is the Jewish marriage contract, signed by me and my partner and our two witnesses. They will sign in English and in Hebrew, and one’s Hebrew name generally consists of one’s first name, one’s gender, and then one’s father’s name. We will go out of our way to ask our witnesses to sign also using their mother’s names to identify themselves. But should I really have to ask?

10. Partner dancing.
My partner and I have been taking dance lessons in the hopes that we will do more than just hug for our first dance. While I have been finding the dynamics of power and consent in partner dance quite interesting, I am clearly the follow and he is clearly the lead. I guess this relates to #8, in that I am not a huge fan of taking on something myself just because it is traditional for him to do it. But I still find myself feeling feminized in a way I don’t really enjoy.

I hope this post doesn’t get me into trouble. 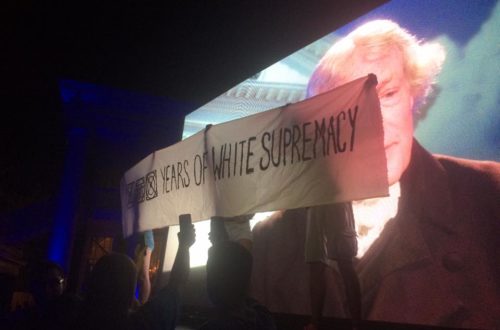 6 thoughts on “Stamps of Sexism”